The Kindness Ethernet
By Lin Ennis 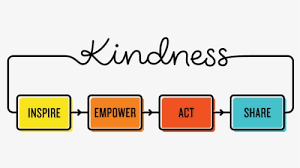 Long ago, before fire was discovered or the wheel invented, human survival improved when we cooperated with one another. Without a written language, we acted in concert, taking on tasks as we saw what others were doing and what remained to be done. Like honeybees. Ants. Wolves. And other friendly creatures. Regard for others improved life for oneself.

Then the Internet was invented. It has been blamed for divisiveness, conspiracy theories and all manner of hate and shaming spewing from extremist infernos of every ilk.

But the Internet began among three nerds hanging out with good intentions. Their dream was making information free for everyone. Thus, “the Internet has no business plan, never did. No CEO…it's folks getting together to do something for fun, rather than because they were told to, or because they were expecting to make a mint off of it.” --Jonathan Zittrain

Why would people do that? “It's just part of your neighborly duty. And, in a way, that's exactly how packets move around the Internet, sometimes in as many as 25 or 30 hops….This is how Internet addressing and routing actually work.” (Zittrain)

Each person passing peanuts or cash is a volunteer, doing a favor, a kindness, for a stranger simply because they were nudged to do so. A small but indescribable bond of togetherness is alchemized.

The Internet is part of an invisible rarefied element that, loosely defined, we call “the ether.” And that brings us to our kindness challenge for the next month.

Send invisible packets of kindness, love, blessing or positive thoughts to the world.

Start with your neighbors, some of whom you like more than others. In a quiet moment that doesn’t need to be longer than a second, think a kindness toward them. Go one by one as you knit and purl or have two or three spare seconds. Wish them light or love or forgiveness—whatever seems appropriate.

After you practice this ethereal thought kindness for a few days, you will notice a change in yourself. Are you calmer? More forgiving? Recognize and appreciate your growing heart connection. Whether your positive thoughts help your neighbors may not be proven, but science has demonstrated they help the “thinker” as much as does meditation, which increases peace and reduces anger and frustration.

Take control of the thought packets that emanate from your own mind. Gratitude perfumes your environment like a peace rose.

The collective consciousness has gotten us into the state we are in, including war. Cooperative goodness sharing, mindfulness and persistent lovingkindness will shift the narrative. Are you in?