Just north of the Illinois state line in Wisconsin can be found a pristine little resort lake called Lake Geneva. At one time, this lake belonged to the Potawatomi Native American tribe and in fact a public walking path that surrounds the lake shore today was initiated by the Potawatomi’s hundreds of years ago.

In the late 1800’s/ early 1900’s, Lake Geneva became discovered by Chicago families, many who were wealthy industrialists, who constructed their summer residences around the lake shore. Not long afterwards, the area became known as “the Newport of the West” because of its similarities to Newport, Rhode Island. 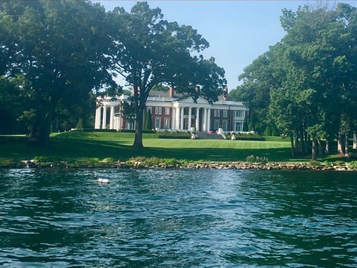 As early as 1887, several of these families came together and committed to creating a fresh air retreat for the poor children of their industrial urban community, a retreat on the shores of the very lake whose crystal clear waters invigorated them each summer. Within ten months, in July of 1888, founders of The Lake Geneva Fresh Air Association welcomed their first summer visitors to Holiday Home Camp—which by the end of August that year, served 226 children.
​
Over one hundred and twenty five years and 45,000 children later, Holiday Home Camp still stands on the original parcel of ground purchased by its founding visionaries. Today, each summer, over 500 youth from the Chicago Metropolitan area and Southeastern Wisconsin gather in Holiday Home’s idyllic wooded setting on the shores of Lake Geneva. One of them is pictured here with me at this year’s Gala Fund raiser, the vehicle by which the camp remains financially sound. 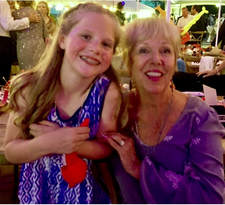 This year benefactors contributed all sorts of trips and items to be auctioned off for the benefit of Holiday Home. A good friend, for the second or third time spent  the entire year constructing and decorating a beautiful doll house which brought in thousands of dollars at the auction. Attendees could also “adopt a camper” by contributing the cost to house a typical child for a summer session.

For the last three years, I have been privileged to participate in some of the activities of the camp by being part of a group of volunteers who teach the kids cooking skills. 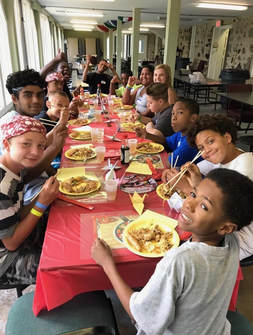 his year, our theme was Asian food. It was great fun to guide these children into constructing “spring rolls”, stirring up fried rice and  cooking Orange Chicken. Once prepared they all sat down to gobble up the fruits of their labor. Later they  enjoyed constructing all kinds of shapes using Japanese Origami techniques.

It is a marvelous and gratifying experience to witness the joy and wonder of the children, most of whom spend most of their “other” lives in ghetto like environments with broken families, gang violence and more, and to witness the new lease on life they receive, if only for a couple weeks, at Holiday Home Camp. A prime example is the young girl pictured above with me. She was unbelievably personable and self-confident giving an inspiring account to those at the Gala of what Holiday Home meant to her. Little did we know that she was a camper because her father was in prison for murdering her mother.
​
Clearly, Holiday Home and The Lake Geneva Fresh Air Association, epitomize the whole philosophy of Sedonakind and I am proud to be part of both organizations.