The Angel On The Ferry Boat
By Heather Molans 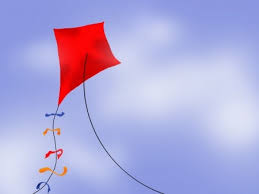 It was cold and gray as the passengers boarded the ferry boat.  Dressed in the somber colors of winter, they braced for the cold trip across the bay.  A group of complete strangers, the crowd spoke very little to one another as they waited for the ferry to cast off.

The engines were churning as a small, somewhat disheveled man wobbled up to the boat and climbed aboard.  Although it was still morning, it was obvious that he had already enjoyed a nip or two from the pint bottle in his coat pocket.

The passengers separated and created a pathway for the man to pass, not wanting to look him in the eye for fear he might bother them or worse, might ask for money.

The boat lurched and began its slow, familiar route across the bay.  People stood solemnly with their hands in their pockets, and silently turned their backs against the wind.

Turning my head and pulling my hair away from my eyes, I caught a glimpse of a flash of red.  Spinning around, I was just in time to see a bright red kite sliding from the disheveled little man’s coat, and watched spellbound, as he unfurled his treasure and guided it high into the sky above.  His eyes twinkled and he shouted and laughed, and handed the string to a young boy.  The red shape in the sky dipped and bobbed, and the passengers watched, transfixed.
Suddenly, all eyes were on the kite, and the string was passed from person to person, as the ferry chugged across the bay.  Everyone sucked in their breath as the kite would dive, and cheered with glee when it regained its flight and danced in the sky.  Excited chatter among the passengers had taken the place of silence, and the little man made sure that everyone held the string at least once.

The ferry chugged toward its destination, and the water was filled with boats as it approached the busier side of the bay.  And then, a large fishing boat approached and passed the ferry.  The kite dipped, and it was obvious that its string was caught somewhere on the other boat.  The line snapped, and the kite disappeared into the water.  The crowd gasped, and a moment of magic was over.  Or was it?  The magic continued as the passengers disembarked, talking about what a wonderful experience the trip had been.  The little man was now the center of everyone’s attention, and several patted him on the back affectionately.

Once on land, we all went our separate ways, but the little man had changed us all.  We learned about community and sharing, and not to judge a book by its cover.  I took away more than a memory of a delightful experience.  My heart had been touched by the realization that although he was not accepted by others, he shared kindness selflessly wherever he went.

They say angels walk among us, and I think I met one on a ferry boat.
​
A note from Heather:
I never learned the little man’s name, and he missed the last ferry home. The crew as it turned out, knew him well, and fondly murmured that he was probably asleep in a pub. I would never see him again, as we were in Seattle where my husband was doing his two week active duty for the Navy Judge Advocate General’s Corp ( JAG) in the early 1980’s. However, the event it still clear in my mind, and the magic of the moment never left me.