Babes In Blankets
by Kathy Huffstetler 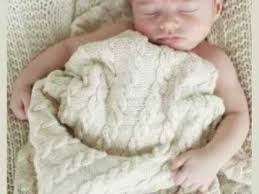 Before I retired, I worked for Children’s Services for almost 30 years in many different jobs, primarily in the field of child abuse. While I was in graduate school I worked as a Volunteer Coordinator for two county departments for half the county along with another colleague. Of course my heart was with Children’s Services.

One of the many problems we had was that hospitals were discharging infants to foster homes wearing only a paper gown. This was very disturbing to children’s social workers who picked them up and took them to foster homes.

About that time Rachel Prater entered my life. When I told her about our problem, she started making baby gowns. Before long she said she knew a lady who she thought could help. Then she introduced me to Betty*. Betty was in her mid-fifties. After she had a heart attack her son sold her home and placed her in an independent care facility. She was instantly drawn to our program and started knitting blankets and baby clothes for infants, and then with the help of their activity director, her friends did too. Deciding they needed a name they chose “Babes in Blankets.”

The next thing I knew they wanted to have a baby shower. I walked into the Activity Room, and there were around 20 people, both women and men seated in a circle waiting for me. They gave me a seat and put a bonnet on my head. I was the mother-to-be!

Those who could knit did; those who couldn’t went across the street to a variety store and bought baby items. Some of them didn’t have much money, but they took part of their monthly allowance and bought things. As I sat there opening their precious gifts, I was deeply touched by their generosity and enthusiasm.

When I had to take Statistics in grad school, I needed to choose a project and set up a model for eight weeks of assignments. Each week’s assignment was based on the last one, so it was critical to get it right. The professor had high standards. I chose “Babes in Blankets” even though I had a very small group with very fragile members. My professor not only approved the project; he loved it.

This experience was deeply impactful in my life in many ways. It all started with just a few women who wanted to do something for babies which spread to other people. I realized later that it gave them a sense of purpose to help us. They were helping us, and we were helping them. It was also helping me to see the other side of humanity.

Later our Special Medical Placement Unit invited me to a meeting. Their staff worked with children with illnesses like kidney failure and osteogenesis. One of their foster mothers explained that they wanted to have a Christmas party. She said, “No one ever invites our children to parties. We want a party of our own.”

I felt a little overwhelmed. So I called Rachel, and she and the Babes in Blankets started knitting and making slippers and other items. The Medical Placement Unit arranged to use the auditorium at Rancho Los Amigos Hospital. Others had toys donated. McDonald’s donated orange punch and hamburgers, and Medical Placement Unit staff decorated the hall.

When they saw the children’s needs, they wanted to help beyond Christmas and ultimately started a 999** Sheriff’s run from Los Angeles to Las Vegas. They provided things our programs didn’t provide like computers for the children. Little by little they became more involved in the Medical Placement Unit Christmas Party ultimately holding it at STAR training center.

This experience was deeply impactful in my life in many ways. It all started with just a few women who wanted to do something for babies and spread and changed in many ways affecting not just babes, but others who needed something special and drawing others in to share their talents as well.

*not her real name

I had been reading about Sedona Kind for several months. In November 2017 I read a post on a friend’s Facebook. In the Sutherland Springs, Texas shooting in a church ten members of one family had been killed. I read a message of hope from one of the surviving Holcombe family members on a friend’s Facebook page just days after the shooting. After their experience if anyone needed kindness they did.

It was the Thanksgiving holidays. I didn’t know any of the Sedona Kind members, but I contacted Sandy Brandvold, their President, and told her what had happened. Members quickly assembled a box of kindness items: a member painted rocks; hearts and Sedona Kind Charms and a message were assembled and sent. As I expected they touched the lives of the surviving family members in a special way. You can read JoCheryl Holcombe’s story about this loving care package in the Heartfelt Responses.

Since then I’ve attended meetings and have seen how their kindness evolves and grows through so many different projects touching individuals and groups in so many ways each year. They say that each time someone is kind there is a ripple effect. So many acts of kindness, so many people affected, so many ripples being created…