Kindness After the Flood
By Helen Knoll 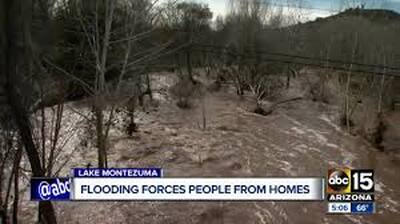 During the night of February 15, Beaver Creek roared over its banks and tore through the small towns of Rimrock and Lake Montezuma.  Fortunately, no lives were lost, but more than 20 homes in the area were battered by three to four feet of water, mud, boulders and debris.  Lake Montezumans quickly put kindness into action to help their neighbors who had suffered losses.

Two days after the flood, a thick layer of mud and debris still covered yards and vehicles, but homeowners and volunteers were already hauling away heavy loads of carpet, drywall, furniture, and tree branches.  In the town square, which was out of the flood zone, my husband Bob and I saw that a potluck dinner/fundraiser was being held to benefit the community.  Although we didn’t have a dish to share, greeters welcomed us warmly.  They refused to let us pay, so we bought raffle tickets, instead, and sat down among strangers, who quickly became new friends.

Embarrassingly, we won two raffle prizes, including a lovely box of cosmetics.  A woman seated nearby had told us that she was rescued from her home by first responders but had had to leave with no toiletries.  The house was later “red-tagged,” meaning it was unsafe to reenter.  At age 88, she had lost her car, her home and all its contents, and was uncertain about her insurance coverage.  Most importantly, she had also lost her son just three months before.

She wept over all these losses, but brightened at our gift of cosmetics and revealed that she’d been a model for Chico’s!  Her neighbors, whose house was above the flood plain, were caring for her in their home.  We also met these wonderful people, who talked about how much they loved living in such a friendly place.

​We had gone to the dinner to uplift folks who were suffering loss; instead, they lifted us up with their warm welcome and their shining examples of kindness.  In gratitude, Bob sang a song that ends with the words “everywhere I go across the land…I am home.”  “Home” is what kindness feels like:  welcoming, nurturing, and supportive, like the people of Lake Montezuma.