Why does kindness matter?
By Felicia Filep 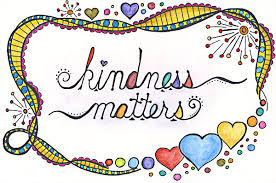 I am unsure when I first learned to be kind, but I seem to remember it had something to do with my grandmother telling me to always respect nature and all its creatures. Her kindness bloomed in her garden where everything seemed to magically grow and all of the animals that inhabited it were looked after. Understanding that kindness could be expressed to all things has stayed with me to this day.

Since I was young, I have rescued animals in distress and nursed them back to health, sometimes releasing them, sometimes making them a part of my family. I don’t think at the time I realized this was being kind…it was just the right thing to do—especially for those that I identified as not being able to help themselves.

As I got older, I realized that my natural instinct was to rescue—always trying to make others’ lives better in some way or giving them the second chance they may never have received.  Kindness meant that I would see the good in others first, and not judge unfairly.  My father had a plaque on the wall in his office that said that until you walked 100 miles in someone's moccasins, you had no right to judge that person and I think this saying really shaped my thinking. Being kind was judgement free, so I did not have to make that 100 mile journey, but I was always to respect the path they had traveled.

My experiences over the last few weeks have given me an opportunity to see how kindness can matter even when facing death.  I recently placed glue traps in my garage floor to ensure the scorpions in the neighborhood don’t come in the house. In the process, they have caught every bug imaginable but scorpions (which does not cause me any concern as I am not a big fan of bugs due to a traumatic experience in grade school). However, leaving for work one morning, I noticed a field mouse had gotten stuck on one of the glue traps and was still squirming to free himself but very close to death. I couldn't bear to watch him suffer a moment longer, so I got my gardening gloves and carefully pried him off the trap. He ran away, collecting leaves on his paws where the glue remained.

The next morning, amazingly the same thing happened but this time it was a smaller mouse, so off I go to get the gloves again and set him free. Later that day, a small bird, seeing the tasty dead beetle on the glue trap, also got stuck. A few feathers later, and lots of struggling, he was free too!

I was very thankful I was there to give these creatures a second chance at life, especially after an ultimate act of kindness in the face of death on May 9th.  I woke up that morning around 5:30am and thought my day was going to happen like any other, but without any warning, my little poodle was savagely attacked by my Border Collie mix, almost killing him. In order to try and stop him from tearing him apart, I tackled him, and reached my hands into the larger dog’s mouth to pry open his jaws and ended up with multiple injuries as a result. At the time, all I could think of was that I was not going to allow this act of ultimate unkindness to happen.

In the end, my actions saved my poodle’s life, but now I had to make a life or death choice about my other dog who I cared about equally. Many said I should put him down for the attack, that he could not be trusted.  I wrestled with this ultimatum as he knew he had done wrong—he was not a killer. Something must have caused him to snap.  The lyrics  “if you love somebody, set them free" came to mind, and so I gave him a second chance and I put him up for adoption.

This act of kindness, although terribly difficult (it was like giving up a child to foster care who had tried to murder his sibling), was rewarded by him being adopted by a lovely man with no other dogs, who gives him tons of love and lots of attention. He has been kind enough to keep me updated as to how he is doing with photos and videos so I am able to share in his ongoing journey.

Kindness DOES matter, and I am so thankful that I did not walk away from these situations. We should never stop expressing kindness, because even in your darkest hour facing death, it will come back to you in ways you can't even imagine.
​
Just as ripples spread out when a single pebble is dropped into water, the actions of individuals can have far-reaching effects.   Dalai Lama