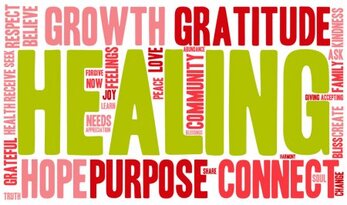 Just as there are sciences of: electrical engineering, physics, chemistry, aerodynamics, etc.; there are also Sciences of Self-Kindness and Gratitude. All sciences utilize the fundamental Universal Law of Action and Reaction.

In his book, Return From Tomorrow, a U.S. soldier, George G. Ritchie described a Jewish man that he met in 1945 in a recently liberated concentration camp in Europe. The man said that German troops came into the area where he lived in Warsaw, Poland in September of 1939.  They selected him to work in the camps and they killed his wife, 2 daughters and 3 little boys.  He immediately knew that their souls of his family were in Heaven with God and that they were naturally experiencing Divine Love and Peace.   Because he did not know how long he would be alive, hechose to utilize his time remaining by being kind to himself and others by Loving the souls (action), of everyone around him, which included the German soldiers who had just shot his family.  Because of his many previous experiences of loving his family, he knew that by expressing Love (action) to everyone's souls, that he would naturally experience Love (reaction), in return from their souls.

George Ritchie immediately noticed the obvious benefits (reactions), of the man's daily chosen consciousness of self-kindness (action) by loving the souls of everyone around him.  Compared to the other inmates, who had emaciated bodies, and were sickly, George noticed that the man was naturally perfectly healthy, (with no emaciated body), and when he was near the Jewish man, George felt love radiating from him.  The man also had a sense of humor and he was respected by his fellow inmates, for when they asked him for advice, he resolved all of their conflicts with Love.

In his book: Hidden Power for Human Problems, Frederick Bailes tells what he read and thought (action), after being diagnosed with the then incurable disease of diabetes, in the early 1900's, which was before insulin was discovered by Dr. Frederick Banting.  As a remote possibility for healing, Frederick read the book: The Edinburgh Papers, by Thomas Troward.  Frederick kept a daily record of his blood sugar, and correlated each day’s blood sugar amount with the positive, self-kindness changes that he made in his consciousness (action).  With his positive changes in his consciousness (action), the health of his pancreas slowly improved (reaction), and he went beyond the usual 18 month death sentence for diabetics until he finally experienced a complete healing (result), of his pancreas about 6 years later.

In his book: The Power of Your Subconscious Mind, Joseph Murphy describes that dis-ease thoughts (action), as the cause of many human problems and diseases (reactions), by one not knowing about the Universal Law of Action and Reaction.  By one’s learning the science of the Universal Law of Action and Reaction, Joseph Murphy gives practical ways (art), which an individual can choose for effectively applying the science and personalized art of positive self-kindness thoughts with gratitude (action), for the various healings (result), which he describes in his book, including his personal healing of sarcoma.

In 2018, I first learned about the Universal Law of Action and Reaction and integrated it into my life.

Each day, now, I consciously recognize and appreciate the natural, normal kindness of my body's functions, such as; digestion, assimilation and elimination.   And also the kindness of my normal, natural: heart beating, my healthy blood; my lungs being happy and healthy, etc.
​
If during the day, I experience a negative thought or emotion....I immediately name it as negative and self-punishment.....and I now ask a positive, kind question as to how I can quickly and best replace that negative with a positive, kind thought and emotion. At the end of my day, I relive my entire day and make certain that I have been kind to myself with sincere gratefulness. And thus I sleep in peacefulness, knowing that I have been successfully kind to myself with sincere gratefulness.

In retrospection, I have learned that my daily life has gradually improved over the past 2 plus years, primarily because of my newly acquired positive knowledge, and also because of the "quality of people", in my life.....namely: my friends at the Sedona Community Food Bank and also SedonaKind.

They have become: mentors, metaphors and role-models of kindness and I have many wonderful memories of their kindness.  I sincerely recognize and appreciate (gratefulness), each my dear friend’s integrity and courage to be their true, kind self.