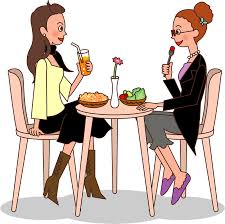 We have all invited someone to lunch .  Very seldom is it because we need to eat. Sometimes it may be to introduce friends to each other thus increasing our circle of friends.  We might want an escape from a down day or just catch up and share good and bad. Once refreshed and ready, we then return to whatever we left.  An invitation to lunch is that sometimes a friend needs kindness and support

This is one of those times.

My neighbor and friend in NJ became a big part of my life.  At first her youngest son would show up at my door to play with my dog, bake cookies with me or set the table for dinner with me until his mom came home from work.  For over 25 years, we gathered our two households for parties and holidays in a way that melted our two households into one big family.  I even tried to help her quit smoking about a dozen times.  We lived in this friendly suburban neighborhood grateful for friends and neighbors until one day, we went to a lunch I will never forget.

“The family doctor says I may have bronchitis that has now become pneumonia” she says.    We stopped at the pharmacy on the way home and promised to get together real soon.   A few weeks later, she went to the pulmonologist and he recommended that he “take a Look” and scheduled some tests.  She bravely underwent exploratory surgery but the doctors said there was nothing to do and sent her home to schedule appointments with an oncologist.

I sat at the kitchen table with her as her news hit me like a tsunami, drowning me in emotion and unable to surface from the depths of despair.  My response was immediately to offer to drive her back and forth to appointments and to chemotherapy.  I knew that the treatments were several hours, so I offered to keep her company.  At first, she wasn’t sure but I simply said that we could go to lunch on the way home, she accepted my invitation.

For weeks, we drove to treatment and then to lunch.  Our favorite spot was an old, historic tavern where we could sit and talk with no pressure to “turn the table” as so many modern eateries do.  By the time we got home, she was tired and I knew that she would sleep.  The next two days were tough and her nausea and fatigue would make any activity impossible.
One day several weeks later, she called me because something awful was happening.  In the shower, she was suddenly covered with her curly red hair.  It was no longer on her head and even though it was part of the information we both knew, it was too intense to accept.  That week, she got her wig and thought she would just keep going.  I noticed that after lunch, her wig came off in the car and it was flung aside.  My company gave her permission to be angry, sad or whatever she was feeling and I was there to hear it.

We kept going to treatment and having lunch with the bravest face we could show.  She was tired and couldn’t sleep.  She told me that every time she turned over, the pillow case was uncomfortably cold on her bare scalp and the wig or scarf was not working.  I had been a knitter for many years and offered to design a soft cap for her to wear at  home and be something that she could sleep in.  I made several for her and soon the wig was history   Her caps were comfortable and I made several colors so that they just became a fashion accessory.

Every week was harder and harder but the simple act of driving and our special lunch helped her stay calm and I really hope she felt supported.  Her kids came by to visit more often so I was glad that she had frequent company
I was beginning to pack for my cross country move to Sedona as her treatments ended without any positive results.  Her children were all grown and taking over her home care with the support of Hospice at Home.  So much was happening at once that everything was a blur.  I promised to send photos of the new house once we unpacked   Our move was very emotional because we were leaving friends and family but it was such a great adventure that I went full speed ahead.
My last phone call to her was about a week after we settled in.  Her daughter held the photos and I talked to her about our adventure driving cross country.  The last thing she said to me was, “Yeah, you made it !  I knew you would.” and she laughed.  Her passing was peaceful at home with her children around her.  I am just sorry I could not have shared my new home with her in person but I am not sorry about a single minute we spent together. I still make her hat pattern over and over again for anyone who wants one for a friend.  I think it gives me another moment to share with her.
​
Kindness comes in all forms and I think ours was in the form of lunch.  Sometimes lunch isn’t really always just lunch.