Why Wouldn't I?
by
Linda Brecher
​ Volunteer Humane Society of Sedona 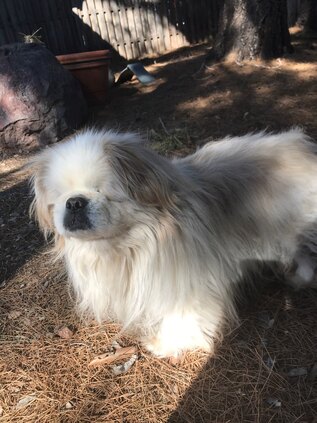 Colin, now Rufus, arrived from the Maricopa Animal Shelter in Phoenix about 2 months ago. We receive many animals from their shelter because of overcrowding, but Colin was special.

As a dog walker, my first encounter with this cream colored Pekinese was probably his 2nd day. He would not leave his crate and barely ate. I truly thought he was one who we would not see for long. I also knew that the Humane Society of Sedona goes above and beyond general animal care, and they would do everything possible for this poor little dog who needed so much.

He was brought to us with 1 eye removed, a missing toe, and another toe that had to be removed on the same foot due to a mass that caused a limp. Money from our medical fund, and generous donations from many supporters, enabled Colin to have his other eye removed due to complications, along with his toe and a good dental exam.

​I was told that a man had been visiting Colin 3 or 4 times a day with intent to adopt when Colin was comfortable enough to be brought home.

A few weeks ago, I was able to go up to this guardian angel to thank him for finding the love and care that Colin needed to go forward. His answer to me was, “Why wouldn’t I?” Such a perfect response.
​
Colin l (now Rufus) left yesterday for his new life. That’s what makes shelter involvement so fulfilling.